The company, that is behind the broadband submarine cable system along the coast, said services between Mombasa and Zafarana have been affected.

“All linear transmission traffic on the SEACOM Subsea Cable system on the East Coast of Africa, to and from Europe are affected,” a statement from the company reads.

MyBroadband, a South African IT news website reported that investigations are underway to determine the cause of the outage and the estimated time to repair.

The outage is said to have occurred at 10pm on Tuesday.

SEACOM said customers with IP or other managed network services terminating between Dar es Salaam and South Africa will remain unaffected but could experience a slight increase in latency as traffic is routed over its West Coast transmission links.

Zuku, that relies on SEACOM for its data services released a statement on Wednesday acknowledging the outage.

“Our traffic is now on alternative routes.However these cannot efficiently handle the load, and thus the slow speeds you’re experiencing.Our provider is working to restore our main route in the shortest time possible.Kindly bear with us,” Zuku said on Twitter.

According to Reuters, the Mauritius-registered private equity project invested the fibre optic cable linking east and southern Africa to Europe and Asia.

The Reuters report noted that investors in the Ksh. 67 billion venture included an arm of the Aga Khan Fund for Economic Development, Venfin Ltd, and Herakles Telecom LLC.

They reportedly had stakes ranging between 23.75 percent and 26.25 percent.

Shanduka Group and Convergence Partners were each reported to have a 12.5 percent shareholding.

The 17,000-kilometre cables for internet service in East Africa were said to be 90 percent cheaper than satellite.

Safaricom shifts funding to catch up on fixed-data demand 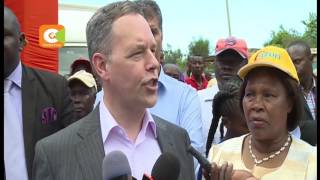