By Peter Gachanja For Citizen Digital

The Laikipia County Government is looking into ways of unlocking the county’s great potential and present it as a viable tourist and investment destination.

This is after a survey by the defunct Kenya Transition Authority ranked Laikipia 5th in terms of wealth potential.

The County Administration wants to take advantage of this to create a favourable and conducive environment for investment.

According to Governor Joshua Irungu, discussion forums on various investment opportunities and available incentives for investments have been taking place in an effort to create a road map on how to tap the potential of the county.

He, however, observed that the county was not well known since most of the wildlife in the region lives outside protected areas despite the county being a home to several private conservancies among them Laikipia Nature Conservancy, Ol-Jogi, Borana and Ol-Pajeta.

Speaking to Citizen Digital in Nyahururu town, the governor said these remain potential tourist attraction sites that are yet to be exploited, but observed that the county was in the process of establishing a policy and a Bill that will pave way for the creation of the Laikipia Tourism Board.

He said the county government was formulating a Bill in the County Assembly that will create room for partnership with other conservancies in order to exploit the tourism industry.

He added that the establishment of the LTB would also help create more job opportunities through the setting up of cultural manyattas and eco-tourism, especially in areas around conservancies owing to the fact that the county enjoys a diversity of cultural activities and ethnic groups.

However, Laikipia County Women Representative in the National Assembly Jane Machira Apollos has criticized the county government saying it was dragging its feet to ensure that county’s potential if fully exploited.

She noted that the leadership lacks creativity and innovation to help exploit the wealth “hidden” in the bushes and also under the soil.

The multi-ethnic county, Apollos says, makes the Laikipia a unique county and hence there is a need for the local leaders to look into ways of tapping the potential in order to attract more tourists.

Set against the backdrop of Mt. Kenya, Laikipia is one of the richest areas in this country in terms of biodiversity and has abundant and diverse wildlife, with the highest population of endangered species in the country.

Thomson Falls, a tourist attraction site in Nyahururu Sub County, is becoming the centre of focus as investors sink money in to the neighborhood.

Laikipia harbors a wealth of wildlife species, including a wide range of bird species. Spotting Grevy’s zebras–the handsome, radar-eared, fine-striped species – is almost a certainty, as a quarter of Africa’s remaining population lives in Laikipia.

It’s also home to the popular “Big Five” animals that migrate between the slopes of Mount Kenya, the Laikipia safari conservancies, and the Samburu region.

Previous Post
Dubai: Leveraging on theme parks, shopping to drive tourism
Next Post
And the Oscar for best animation goes to…. 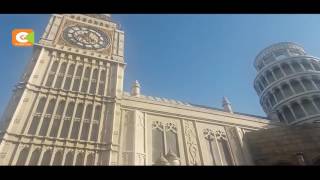 Story By Peter Gachanja More by this author