Police will from Friday resume using alcoblow breathalyser gadgets in major towns after a report revealed that 60 people were killed due to drunk driving between October 2-4.

In a statement released on Friday, the Inspector General of Police and the National Transport Safety Authority (NTSA) expressed concern over rising cases of road traffic accidents across the country.

“Reports indicate that 2,689 persons have lost their lives between January 1 and September 30, 2020 compared to 2,655 during the same period last year, an increase of 1.3%,” the statement reads.

Motorcyclist and pillion passenger deaths increased by 44.94% and 19.44% respectively.

Consequently, the National Police Service has been directed to undertake nationwide enforcement operations.

Drivers will be monitored to check for speeding, lane discipline, compliance with Public Service Vehicle (PSV) licensing requirements and roadworthiness of vehicles.

“We assure the public that measures to prevent the spread coronavirus shall be in place when undertaking these activities,” the statement adds. 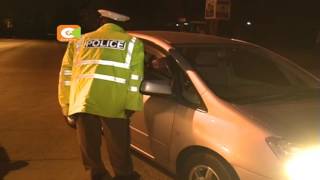