Blogger Cyprian Nyakundi has been freed on a KSh.300,000 cash bail pending the mention of his Ksh. 17.5M extortion case on February 7.

Nyakundi and his co-accused Emmanuel Nyamweya appeared before Milimani Senior Principal Magistrate Kennedy Cheruiyot on Friday where they denied the extortion charges.

They have been accused of attempting to obtain KSh.17.5M from a city banker in order to retract controversial posts from Nyakundi’s blog.

It is also alleged that they had received a KSh. 1M from Victoria Commercial Bank Limited’s Chief Executive Officer Yogesh Pattni.

The court also heard that Pattni had obtained court order barring Nyakundi from publishing libellous articles about him and the back.

His legal team sought to have him cited for contempt of court saying he had constantly flouted court orders. 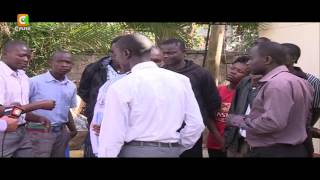