By Atieno Mboya For Citizen Digital

A dangerous gray haze descended on Northeast China over the weekend, choking off schools, flights and industry and endangering citizens simply trying to breathe, according to local reports.

China saw the smog coming and last week issued its first red alert of the year for 23 cities.
As of Saturday, the smog covered 10.1 million square kilometers (3.9 million square miles), according to the country’s Ministry of Environmental Protection.

In the port city of Tianjin, just southeast of Beijing, officials shut down expressways, increased public transportation capacity by 15% and ordered cars to run on alternate days based on whether the vehicles’ license plates end in odd or even numbers, the state-run Xinhua news agency reported. 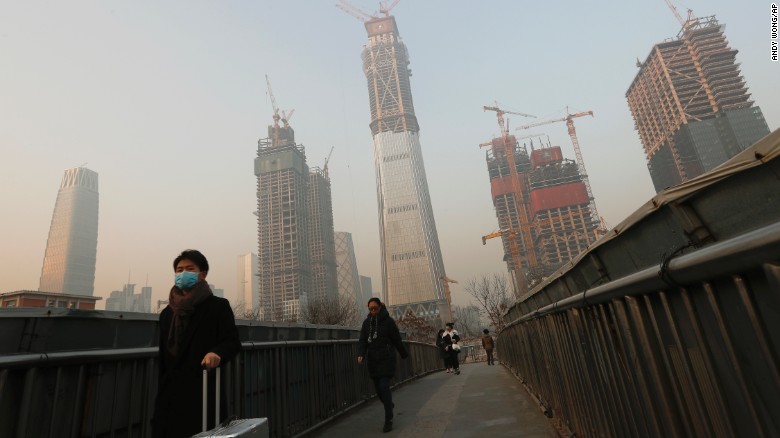 Tianjin Binhai International Airport, a major air cargo center, suspended service from Sunday evening to mid-morning Monday, resulting in the cancellation of 131 flights and 75 delays, Xinhua said.
The cost of China’s political blue sky
Beijing, the capital, also restricted automobile traffic, while in Shandong Province, down the coast from Tianjin, officials closed toll gates on four expressways. Flights were also delayed in Shandong.
Other measures undertaken by affected cities include suspending construction projects, canceling classes for kindergartens and primary schools and closing or reducing production at some factories. The measure affected 1,200 factories in the capital alone, the Ministry of Environmental Protection reported, citing the China Securities Journal.

The situation is so dire that it’s created a spate of “smog refugees” who are fleeing Beijing for cleaner air to the south, according to the South China Morning Post. With the exception of first-class seats, tickets to resort areas in Yunnan and Fujian provinces are almost sold out, the paper reported.
Air Quality Index
Source: U.S. Environmental Protection Agency
Cities along the Yellow Sea coast — including Beijing and Tianjin, along with the provinces of Shandong, Hebei, and, further inland, Shanxi and Henan — were among the hardest-hit locales. But unhealthy smog levels — specifically, air quality index values higher than 350 — were detected as far southwest as Chengdu and as far northeast as Jixi.
Some other high scores
Beijing issues red alerts when pollutants are forecast to push the air-quality index higher than 200 for at least four days, above 300 for two or more days or higher than 500 for 24 hours.
Some cities had pockets where air pollution was off the charts. Literally.
While the air-quality index used by the US Environmental Protection Agency stops at 500, several Chinese cities had readings that far surpassed that number as of early Tuesday.
According to a real-time monitor administered by the World Air Quality Index Project, Baoding recorded a score of 764, Zhengzhou an 836 and Handan a 949. In Shijiazhuang, a city of 2 million people located a four-hour drive southwest of Beijing, monitors recorded several areas where pollution levels were above 800 and one where it was 999. 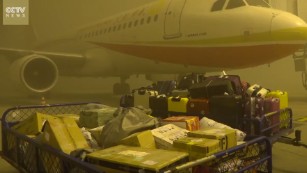 Smog strands over 20,000 at airport 00:48
To put those numbers in perspective, India, Kosovo and Macedonia had areas where pollution levels topped 300 late Monday (and Sanliurfa, Turkey, and three cities in Mexico had scores higher than 860), but nowhere monitored by the World Air Quality Index Project had numbers anywhere near China’s.
The highest UK score Monday was a 142 in Stanford-le-Hope, east of London, and the highest U.S. score was a 168 in Seeley, Montana, according to the project map, which focuses more heavily on North America, Europe and Asia than it does other continents.
While China’s Ministry of Environmental Protection reported improvements in air quality in some cities, the red alerts are expected to stay in effect until Wednesday because of weather conditions that are preventing the pollution from dissipating.
Humidity is expected to remain high in northeast China, while fog is predicted to enshroud parts of Beijing, Tianjin, Hebei, Shandong, Henan, Jiangsu, Heilongjiang, Jilin and Liaoning. Visibility will dip below 500 meters, and possibly below 200 meters, in these areas, the Chinese Meteorological Administration reported.

Previous Post
DOCTORS’ STRIKE leaders found guilty of CONTEMPT
Next Post
Don’t back down for anyone, Raila warned ahead of 2017 polls

Story By Atieno Mboya More by this author