By Lisa Kamau For Citizen Digital

Chief Justice Willy Mutunga has confirmed that he will be leaving office on Thursday, one year before the expiry of his 5-year term in office.

Speaking during an interview with Citizen TV, CJ Mutunga said he will be turning 69 on June 16, and added that his leaving early is aimed at averting a constitutional crisis come next year.

“I want to leave early because in August 2017 there will be no swearing in (of the president) if the CJ is not there. The process (of choosing a CJ) is lengthy and might cause a huge constitutional crisis. So I’m going to let the process start early,” he said.

The CJ leaves at a time when the Supreme Court is faced with a crisis over the retirement ages of Justice Philip Tunoi and Deputy CJ Kalpana Rawal.

CJ Mutunga expressed hope that the crisis will be resolved by the time he leaves office on Thursday, saying: “The judgement is at 2:30pm on Tuesday, I’m hoping by the time I leave the issue will have already been solved.”

CJ Mutunga is confident that he leaves the judiciary better than he found it, and rubbished claims that he was being forced out by cartels, saying that there are no cartels in the judiciary.

“I’m leaving the judiciary a better institution than he found it,” he said.

“I don’t think its possible for the next CJ to rubbish the changes I have made,” he added.

Mutunga did not however take all the credit for himself, saying that judiciary transformation was a collective effort.

“Judiciary was not about me, but I was part of a collective endeavour to change the judiciary,” he noted.

On future plans, the CJ said he was not interested in running for the presidency, saying that being president is “a lot work” and that he was happy to have served five years on the judiciary.

I am not the high priest of corruption, CJ Maraga says 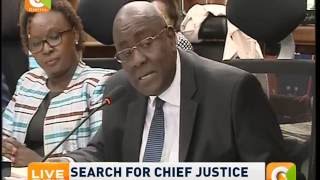 Story By Lisa Kamau More by this author