By Johnson Muriithi For Citizen Digital

Kirinyaga County police are looking for a father who abandoned his daughter at the Kutus bus station.

According to Gichugu Sub-County Anthony Mbogo, the incident was reported to Kutus police station by good Samaritan Simon Munene, who told police that he was approached by the student, who was clad in full school uniform.

Mbogo stated that the student attends St Catherine Nthangaiya Girls High School in Runyenjes and is in Form One.

According to the Gichugu police chief, the girl claimed that her father, Josphat Rutere, abandoned her on their way to school when they arrived in Kutus town.

She told the cops that her father had sent her to buy airtime, but when she alighted from his car, he sped away in a huff and a flurry of dust.

Mr. Rutere allegedly stated that he cannot care for a child who is not his, then drove away in his black Ford Ranger, leaving the minor stranded.

According to the police officers who investigated the case, the girl lives in Kabati (Kitui) with her father after losing her mother in a car accident a month ago.

As of the time of publication, the teen, whose only contact is her father, was at the Kianyaga police station. 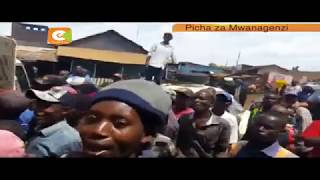 Story By Johnson Muriithi More by this author