By Stanley Mativo For Citizen Digital

A former bodyguard of Senator Mutula Kilonzo Jnr was on Thursday handed a three-year non-custodial sentence after he was found guilty of shooting and injuring a man during a gun drama that ensued at the Makueni County Assembly in 2014.

Shadrack Kioko, an Administration Police officer, had been charged alongside three other police officers, who were acquitted.

Senior Principal Magistrate James Mwaniki ruled that although all the bodyguards had opened fire during the incident, Mr Kioko fired at close range and injured Mr. Brian Mutua, an Assembly orderly. He was convicted of unlawfully shooting the assembly official.

The officers opened fire to disperse Governor Kivutha Kibwana and his supporters who wanted to access the Assembly premises where local politicians were having a meeting.

While convicting Shadrack Kioko, the magistrate ruled that the other bodyguards were justified to open fire since the crowd that had accompanied Governor Kibwana was a threat to the assembled politicians.

Mr. Kioko had pleaded with the court not to hand him a custodial sentence arguing that he was nursing a sickly father. 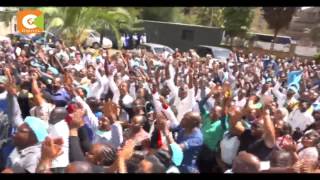 Story By Stanley Mativo More by this author