From gang members in Korogocho slums to green spaces

As a young man, Moses Muchina used to rob people who were unlucky enough to have to cross through Korogocho slums after dark.

Until a few years ago, People’s Park was a dumping site in the slum northeast of Nairobi – filled with garbage and even human waste – and a crime hotspot.

With nearly one in five Kenyan youth unemployed, according to the World Bank, car jacking, burglary, and robbery with violence are common across Nairobi and its slums.

But today, People’s Park is no longer a “no-go zone”, as Muchina called it.

With well-manicured grass, stone paths and trees offering shade from the scorching sun, it has become a popular spot for Korogocho residents to meet and play.

And it was Muchina, along with a group of former gang members, who led the transformation.

As co-founders and mentors of the youth-led volunteer group Komb Green Solutions they have been cleaning up public spaces in and around Korogocho for the past two years.

Local residents say they now feel safer, and officials credit the project with helping reduce the rates of robbery and homicide in the area.

“Many of our children were killed as a result of engaging in crime,” said Phelistus Libulele, who leads a weekly meeting for community health volunteers in the park.

Before the Komb Green project, she used to have to rent a venue so the group could meet safely. “That narrative has now changed for the better of our future generations,” she said.

What Muchina described as his “wake-up call” came in 2017, when he noticed crime levels rising in the area.

Over the span of a few years, several young men he knew from the area were lynched by members of the public or gunned down by the police, he said.

Muchina thought that if young people could focus on “meaningful activities” that could keep them away from crime and prevent more deaths.

He was working in construction at the time, having picked up some masonry skills when he spent time in prison for gun possession, and also attended police-run forums to help reform ex-gang members.

He started asking people at work and at the forums if they would volunteer some time to tackle the garbage that was making the local park unusable.

One who took him up on the offer was Frederick Okinda, now chairman of Komb Green Solutions.

“I got into crime while in high school,” Okinda said. “I used to see my friends with loads of money, and that tempted me even more. I was very stupid at that time.”

It was after he lost his tenth friend in a police shooting that he finally decided he had to find a way out of crime, and ended up at the police forum where he met Muchina.

The two gathered a group of 16 men and women, some of them former gang members and sex workers, and with donations from local residents bought the tools they needed to start their first clean-up project.

Today, Komb Green Solutions – whose name Muchina said is a call for young people in Korogocho to “comb away” their involvement in criminal activities – has grown to about 70 members.

Korogocho area chief Omache Nyabuto said that while there are no reliable crime rate figures for the slum, he has seen reports of serious crimes drop in the two years since the group cleaned up the park.

Nyabuto stressed that there are also other factors behind the growing peace in the area, but said the park has had a huge positive effect.

To get even more benefit out of the space, he has launched a personal campaign asking people to donate small stalls so that Komb Green members can make money selling drinks and snacks to people visiting the park.

He is also working to convince internet service providers to install WiFi in the park. “That will help youths look for job opportunities online and help them interact with the world,” he said.

In March, local non-profit Public Space Network recognised the impact of the People’s Park by granting Komb Green Solutions a first prize of 100,000 Kenyan shillings ($1,000) in its competition for youth-led initiatives transforming public spaces around Nairobi.

“These projects help (young people) turn away from crime because they have something meaningful to do and make an income,” Anna Tehlova, coordinator of the Public Space Network, told the Thomson Reuters Foundation.

“The projects also help challenge the (negative) stereotypes that the community and the police have of youths.”

Maryvine Nyanchoka, environmental officer for the Westlands constituency in Nairobi county, said youth-led groups have so far transformed over 110 neglected areas around the city into safe public spaces in the past three years.

The government recognises the need for more open public spaces, she said, but often new parks quickly become a target for developers who use illicit means to buy up the land.

As an example, Nyanchoka pointed to a local cemetery that had become an illegal dumping site. Last year, local authorities transformed it into a playground.

“Now, I am told the land is like a hot cake, many people want it,” she said.

Part of the problem, Nyanchoka said, is the Nairobi county government has no environmental policy to address factors such as land ownership, air quality and waste management, which would help in its goal to turn more neglected green spaces into parks.

She and her department are currently working on one, she said.

In the meantime, Komb Green Solutions is going to keep doing what it can to increase the number of green spaces around Nairobi, Muchina said.

The group has identified five other spots to clean up this year. That means five more communities who will have a new space to help them feel safe, he said.

“I like the fact that our children are not engaged in illegal activities (anymore),” he said. “The story has changed over time.” 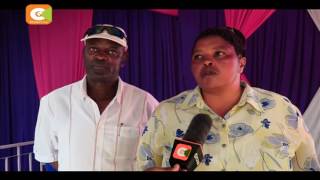