The government has backtracked on an earlier decision to shut down 15 schools targeted in the second phase of evictions in the Mau Forest.

According to Nakuru County Commissioner Erastus Mbui, the decision to close the schools had been reversed to pave way for learners to carry on with their studies and complete the Third Term.

“In the interest of pupils, for now the government will allow children to go back to school and complete the exams set to be written in Third Term without any disruption,” said Mr. Mbui.

The county commissioner, however, encouraged voluntary relocation of families living in the Mau to forestall looming forced eviction slated to take place within 60 days.

Last week on Wednesday, Rift Valley Regional Commissioner George Natembeya said the targeted schools are not government institutions and have been set up in the area illegally.

Natembeya had asked parents not to take their children to the institutions once schools re-open for Third Term.

The government is targeting to reclaim 17,000 acres of land in the phase two of Mau Forest evictions which will affect 10,000 households. 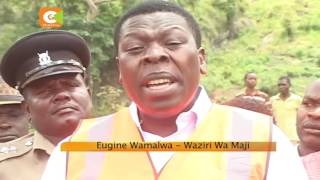