By George Amolo For Citizen Digital

A police Inspector in being held at the Ukwala Police station in Ugenya sub-county.

Citizen Digital understands that he was arrested on Saturday night for violating the government’s curfew orders.

Inspector Hussein Abdulahi who is attached to the Sega Police Post was arrested by Ukwala OCS Timothy Kwemoi at a bar in Sega during curfew hours.

The officer was found smack in the middle of night-out with several local residents at the Leonardo Bar at around 8.30 pm by Ugenya sub-county Directorate of Criminal Investigations team led by Corporal Martin Wanyonyi.

It is not clear why the bar was still open despite a government’s directive ordering all bars to be closed over the new coronavirus.

Officers who stormed the bar demanding to know why it was operating past the curfew time had a hard time cornering inspector Abdulahi who whipped out his pistol and started shouting.

The detectives then called the OCS who arrived with three other officers.

The inspector who appeared knackered at the time attempted to whip out his pistol again but was quickly overpowered and disarmed.

During the arrest, the Inspector of police became violent and assaulted the OCS Timothy Kwemoi who is currently nursing a head injury.

Siaya County Police Commander Francis Kooli confirmed the Saturday night incident, noting that the officer was in custody pending his arraignment in court.

Embu medics on the spot for being ‘drunk’ at work 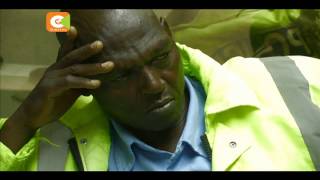 Traffic cops arrested with a paper bag full of money

Story By George Amolo More by this author