By Dennis Nduhiu For Citizen Digital

A 32-year-old woman is nursing deep cuts at Kiria-Ini Mission Hospital after she was allegedly assaulted by her husband.

Josephine Wangari, who hails from Gacaru village in Kiharu Constituency, said that on Tuesday, July 11 night at around 1am, her husband, Josphat Kimani, called her from the bedroom over a matter he wanted to discuss, which quickly culminated to a heated argument.

Wangari further told the press that after the argument arose, her husband purportedly smeared pepper on her eyes and mouth impairing her vision. He then reached for a machete and started attacking her.

Recounting from her hospital bed, she revealed that the commotion awakened the children, regardless, that did not deter him from continuing to mercilessly lacerate her before the children.

She further noted that, even after pleading with him to stop, her efforts were futile and she was forced to desperately ask her children to scream for help.

Luckily, the neighbours answered their distress call but it was too late since she had already collapsed bleeding profusely and the husband had fled.

Wangari is now calling for the arrest of the suspect, since she fears for her safety.

“I’m deeply fearful because I don’t know whether my husband can visit me in the hospital bed and kill me as he promised when he was slashing me,” Wangari said. 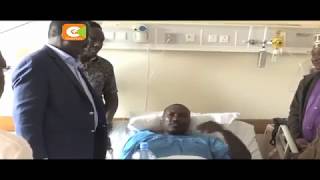 Story By Dennis Nduhiu More by this author