The Independent Electoral and Boundaries Commission (IEBC) in a statement on Thursday said a member of its staff had been killed by unknown people in Tiaty.

According to the statement, Mr. Brian Silale was the commission’s Constituency Administrative Assistant (CAA) for the Tiaty constituency.

The commission said Mr. Silale was last seen alive when he was picked up by unknown persons on Wednesday at the Chemolingot Shopping centre.

At the time of his alleged abduction, the commission said he was in the company of five other people.

Further, the IEBC said that Mr. Silale had been murdered under unclear circumstances and the remains of his body with other bodies recovered on Wednesday in Arabal.

The IEBC has condemned the murder and demanded that relevant government agencies probe the matter to its conclusion.

On Wednesday, residents of Arabal had woken up to bodies of six unidentified men dumped in the area.

They were picked police officers and taken to the Baringo County Referral Hospital morgue.

Following the incident, Rift Valley Regional Commander Goerge Natembeya said an unconfirmed number of bandits had attacked the Arabal area, making away with 50 heads of cattle.

The bandits, Mr. Natembeya said, were pursued by over 70 police officers and in the resulting exchange of fire, some lives.

He said that as of Tuesday evening, one person had been killed and two cows shot dead.

Five police officers were also injured during the operation and are receiving medial care at a private hospital in Nakuru.

48 out of the 50 cows that had been stolen were also returned to their owners.

Mr. Natembeya also warned that the government would be deterred by ‘organised crime syndicates’, warning that illegal settlements and villages would be rid of and sanity in the region restored.

Drought menace in highlands of Baringo

At least 40 goats stolen in Kasiela, Baringo in fresh attack 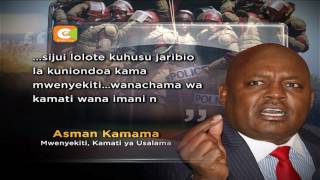