Just who are the Akasha brothers?

Ibrahim Akasha was gunned down in an alleged assassination in Amsterdam, Netherlands in 2000.

He left behind three wives, sons and daughters to continue running the Ksh.20billion family business.

Kamaldin Akasha, Baktash Akasha and Ibrahim Abdalla Akasha hit the road running amidst a waging family feud over control of the estate.

The three daughters have since kept out of limelight and very little is known about them.

Kamaldin died at Pandya Hospital in Mombasa after a hemorrhagic shock due to gunshots to the neck and head.

The incident occurred at a fuel station in Makupa and was carried out by unknown people.

This cast Baktash Akasha as a figure-head in the family, with him taking over alongside a young Ibrahim Abdalla.

In 2014, Baktash and Abdalla Akasha were among four suspects arrested in Nyali over their alleged involvement in trafficking 98 heroin packets.

State counsel, Alexander Mutei, told the court that the suspects were on Interpol’s watch list.

He then sought 21 days in remand for the suspects, to allow the extradition process to be completed.

The duo were extradited to the U.S. in January 2017 after government agencies from the two countries discovered a major smuggling operation.

Their mother, 62-year-old Mrs Fatma Akasha however still maintains that her sons are innocent.

According to Mrs Akasha, she and her three daughters have been left to look after the family, including the children of the accused brothers.

They were charged alongside a Pakistani national Ghulam Hussein and an Indian national Vijaygiri Goswami.

The four suspects could be sentenced to life in prison in the US if convicted. 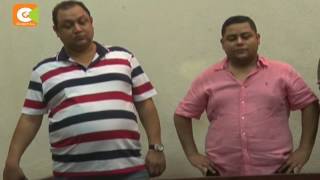