By Matthews Mutai For Citizen Digital

The country’s urban centers face a shortage of 200,000 housing unit annually, with only 50,000 new units being constructed every year.

This is according to Lands Cabinet Secretary Prof. Jacob Kaimenyi, who says the country is currently experiencing a huge deficit annually.

According to a report by investment management firm Cytonn Investments, students and middle income earners are the most affected by the housing shortage whose shortfall leaves close to 150,000 Kenyans un-housed every year.

It is estimated that at least 100,000 people move from their rural homes to the capital city of Nairobi annually in search of employment opportunities.

During the month of March 2015, the then Cabinet Secretary for Lands, Housing and Urban Development Charity Ngilu said that an ambitious housing development had been launched by the government to cater for the increasing shortage in housing.

“The Ministry of Housing seeks to accelerate development and access to affordable and adequate housing through public private partnership and plans to construct 300,000 units by the year 2017. We will soon be breaking ground for an initial 10,000 units for civil servants,” said Ngilu during the launch of National Housing Survey 2012/2013.

According to the survey, urban residents spent approximately 34 percent of their income on rental charges.

Cytonn Investments found that the shortage in mid-income and student housing was because there wasn’t enough institutional capital being offered for these segments, adding that its real estate business could fill that gap.

Kaimenyi, however, says the government is working to bridge the deficit in informal settlements across the country, with the construction of 922 housing units in Kibera now in their completion stage.

The CS also intimates that the government is reviewing the Housing Policy to handle housing challenges and replace current Building Code of 1968 that does not comply with the new constitution. 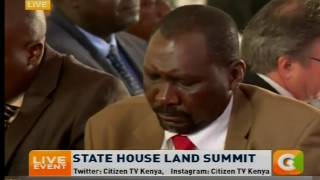 We will settle all landless Kenyans – CS Kaimenyi

Story By Matthews Mutai More by this author