Kenya Power on the spot after giraffes electrocuted to death

Kenya Power has come under fire after two giraffes were electrocuted to death at Soysambu Conservancy in Nakuru over the weekend.

A statement from the Kenya Wildlife Service (KWS) confirmed that Kenya Power is expected to replace the electricity poles within the area to prevent electrocution of giraffes.

Kenyans had taken to Twitter on Sunday evening to express their anger and dismay after pictures emerged of the giraffes that were electrocuted to death.

Some questioned why Kenya Power has not dealt with low hanging power lines despite several complaints over the past two years while others criticized the disregard for endangered animal species such as the Rothschild’s giraffe.

She adds another 11 giraffes have previously been electrocuted in the area by the same low lying power cables.

“Dear @KenyaPower_Care @KenyaPower How many more giraffes do you want to see lying lifeless before you rectify the low power lines at Soysambu conservancy? Really sad to see such beautiful species electrocuted! Stop the killing!” said Elizabth Wathuti, the Head of Campaigns at Wangari Maathai Foundation.

“@KenyaPower_Care PLEASE URGENTLY GO AND RAISE THE POWER LINES IN SOYSAMBU BEFORE WE LOSE MORE WILDLIFE. The costly effect of low power lines on wildlife in Soysambu farm. This is so heart-breaking,” said Jackie Arkle, a conservationist and environmentalist.

Anita Soina, author of The Green War, added: “When we say such structures should not pass through the parks people ask why! This disturbing photos of electrocuted Giraffes at Soysambu should send a strong message to @KenyaPower_Care!”

Previous Post
Kenya records 208 new COVID-19 cases, 37 recoveries and 6 deaths
Next Post
DP Ruto says those pushing BBI Bill ‘are out of touch with reality on the ground’ 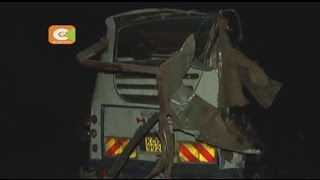