The Kiambu County Government has banned commercial sex workers from operating during the daytime saying it is a taboo that encourages lack of discipline in society.

Kiambu Liquor Licensing Board officials said they were perturbed to see commercial sex workers operating openly on the town streets as early as 9.00 AM.

They singled out Thika and Kimbo in Ruiru as the most affected areas.

They were speaking to bar owners in a series of public participation meetings held at Thika, Juja, Kiambu and other sub-counties.

The wards in Juja include Murera, Witeithie, Theta, Kalimoni and Juja.

The officials accused owners opening their bars during morning hours of contributing to the vice and warned that those caught will not have their licenses renewed.

This comes in the wake of the increasing reports of school children being lured into the trade.

Sophinga wa Bibiana, the Deputy Director of Kiambu Liquor Licensing Board, cited a case where two primary school girls aged between 13 and 15 were busted in Thika.

They are said to be pupils were from Kigumo area in Muranga.

Sophinga further alluded to a brothel operating at the gate of a business college in Kimbo area allegedly to lure college students into prostitution.

Bar owners agreed to follow regulations contained in the Kiambu Alcoholic Drinks Control Act 2018 which they had earlier opposed.

They however urged the county government to speed up the inspection exercise and issue them with licenses. So far, it is alleged that none of them has had their license renewed.

Chief of Staff Gibson Mburu and the Director of KLLB assured them that licenses would be issued the following week.

Can prostitution, the world’s oldest profession, survive the age of social distancing? 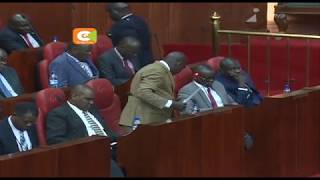 Nairobi MCAs pass motion to ban prostitution in the city

Story By Ann Ngige Nyamu More by this author