Vivian Ntimama, the youngest daughter of the late Cabinet Minister William Ole Ntimama has died at her Nairobi home.

Her elder sister Lydia who broke the tragic news said her sibling succumbed to a massive heart attack on Friday while taking a shower.

“She collapsed and died while taking a shower early Friday,” Lydia said.

The deceased had complained about chest pains before her untimely death and is survived by her husband and their three children.

She has been mourned by among others, Deputy President William Ruto who described her as a ‘strong-minded’ ‘high-achiever’

Vivian had until her demise worked with the Ministry of Foreign Affairs serving as a Foreign Service Officer.

Her family has retreated to their Motony home in Narok North sub-county for the ongoing funeral plans. 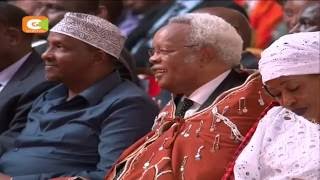