The final touches and preparations for the 57th Mashujaa Day celebrations went into high gear on Tuesday morning with security agents and event organizers trooping into the stadium before 7am.

They braved the rains and the bone-chilling temperatures ahead of the 9am commencement of the much-awaited fete which will only allow 3,000 invited guests into the 25,000 capacity stadium.

The order of events during the 57th Mashujaa Day will be as follows:

1.9.00 a.m. Guests and wananchi are seated at Gusii Stadium

10. His Excellency the President is escorted to the Ceremonial Vehicle by the Chief of the Defence Forces.

11. Her Excellency the First Lady is escorted to the Presidential Dais.

12.His Excellency the President greets wananchi.

13.His Excellency the President mounts the Ceremonial Dais.

15. His Excellency the President inspects the Guard of Honour.

17. The Guard of Honour marches off.

18. Fly-past by formation of the KDF Aircraft.

22. The Deputy President, Hon. Dr. William Ruto, E.G.H., speaks and invites His Excellency the President to address the Nation.

Previous Post
Trump to remove Sudan from terrorism blacklist after Ksh.36B pay to U.S. victims
Next Post
Ruiru: Cops arrest suspect believed to have defiled minor before raping and killing a househelp 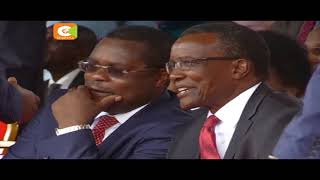