Nuns at the Missionaries of Charity global order celebrated on Sunday (September 04) as Pope Francis proclaimed Mother Teresa of Calcutta a saint of the Roman Catholic Church, 19 years after her death.

Thousands of pilgrims in Saint Peter’s Square in Rome applauded as the nun known as the “saint of the gutters” in her lifetime was officially elevated to join the Church’s more than 10,000 saints.

Francis’s predecessor Pope John Paul II bent Vatican rules to fast-track Mother Teresa to sainthood – a process which usually does not start until five years after the candidate’s death – two years after she died in 1997.

In her adopted home of Calcutta, now known as Kolkata, white saree-clad nuns with their distinct blue borders, were watching a big screen specially set up in the mother house for them to watch the beatification ceremony live from the Vatican.

Mother Teresa was born Agnese Gonxha Bojaxhiu of Albanian parents in 1910 in what was then part of the Ottoman Empire and is now Macedonia. She became a nun at 16 and moved to India in 1929.

She began Missionaries of Charity in 1950 with just 12 nuns. Now, the order has 4,500 nuns across 133 countries and its sisters in their distinctive blue-bordered saris are a common site in her adopted city, home to 15 million people.

A Nobel peace prize winner, Mother Teresa was one of the most influential women in the Church’s 2,000-year history.

“We are very happy. We are blessed with this canonisation because we know mother is in heaven and she will pray for us and she will bless us. And her blessing will be with all of us, the whole world. We rejoice, we are grateful, we are very thankful to God,” said Sister Laisa, one of the senior nuns at the order.

Although criticised both during her life and following her death, Mother Teresa is revered by Catholics as a model of compassion who brought relief to the sick and dying, opening branches of her Missionaries of Charity (MoC) order around the world.

In India, a primarily Hindu nation, Mother Teresa has been accused of looking to convert the destitute to Christianity – something her mission has repeatedly denied.

The Roman Catholic Church has more than 10,000 saints, many of whom had to wait centuries before their elevation.

But Mother Teresa was put on the fast track to sainthood after dying of a heart attack on September 5, 1997.

“I am so grateful to God and happy that our mother, we worked with her, stayed, lived with her and she was everything for us. Today that she is celebrated, canonised, we are very happy and we are grateful to God for this,” said Sister Apolene who runs one of the biggest care homes of Missionaries of Charity in Kolkata

The Church defines saints as those believed to have been holy enough during their lives to now be in Heaven and able to intercede with God to perform miracles. She has been credited with two miracles, both involving the healing of sick people.

The latest involved a Brazilian, Marcilio Andrino, who unexpectedly recovered from a severe brain infection in 2008. He and his wife Fernanda will attend the canonisation, which is considered the highlight of Pope Francis’s Holy Year of Mercy. 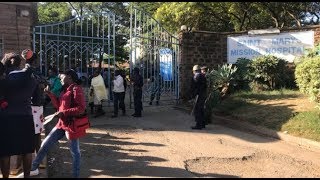