Gatundu South Member of Parliament Moses Kuria has broken his silence and explained the circumstances under which he found himself hospitalised with severe burn injuries on his feet.

According to Kuria, through his friend, he purchased a warm mat from a company known as Ceragem in Nairobi to cure numbness in his feet.

Hours later, his feet exploded and had to be rushed to hospital with third degree burns.

His recovery bed at Karen Hospital has been the centre of frequent visits by high profile political leaders.

“Two weeks ago, a friend of mine convinced me to use a gadget which to my knowledge I thought was authorised. This gadget happened to do some slow burning of my feet. I was trying to cure a problem by introducing a killer solution. I went home at night and my feet just exploded,” said Kuria.

“I came here the following day and they said I had thrid degree burns. They had to do some emegency surgery, then they did a proper surgery and as late as yesterday yet another surgery. Something that was supposed to be a solution has seen me undergo three surgeries.”

He says prior to the accident, he was on the verge of buying the same gadget for his mother.

“If you go through this experience, it is very easy to get depressed. Why did i listen to this guy; someone who has worked internationally for decades and with good education,” added Kuria.

Previous Post
Shortage of condoms hits Taita Taveta County
Next Post
Break up or what? Sauti Sol announce launch of ‘Alone-Together’ as they go solo 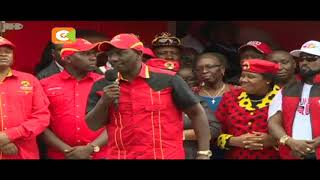