Machakos Governor Dr. Alfred Mutua has advised against the proposal to shut down or merge some of the universities across the country.

Mutua says such a move would be disastrous to the country’s economy and punitive for millions of young Kenyans who are thirsty for university education.

According to Mutua, existing universities should be strengthened, and many other campuses be opened to bridge the growing demand for higher education in the country.

Dr. Mutua said the concerns about declining quality standards in some of the institutions of higher learning should be dealt with by relevant agencies without having to reverse the gains already made in enhancing access to university education to millions of Kenyan youths.

“I do not support the new recommendations of merging universities and shutting down some of them. The reality is, as Kenya grows and with nearly percent of the population being below the age of 40, we need more universities not less,” Mutua said in a statement released to newsrooms on Saturday.

He said establishment of many universities across the country had contributed immensely to creation of more opportunities for the youth to pursue careers and transform their livelihoods.

“In every village, it is now clear that it is through education that children from extremely poor backgrounds have become top notch professionals and industry captains turning around the fortunes of their families and communities around them,” he said.“

“I appreciate the challenges facing higher education funding and quality standards but starting to close down universities located in counties and which we fought hard to get established, is not acceptable to us leaders and to Wananchi.”

Invoking the provisions of the constitution, the governor lamented it was a matter of great concern for anyone to think of collapsing of universities instead of opening new ones.

“Needles to say, under Article 43(f) of our Constitution, governments are compelled to ensure all Kenyans. Indeed, all young people in Kenya attain education to the highest level,” he said.

He said the high number of young people qualifying for admission to universities every year should prompt policy makers to think of expanding the opportunities for higher education.

“Currently, all existing universities are full with students. None is lacking learners. In fact, looking at the numbers of students who finish secondary schools, the places are available in these universities don’t match the demand,” he said.

Lecturers strike called off after over two-month standoff 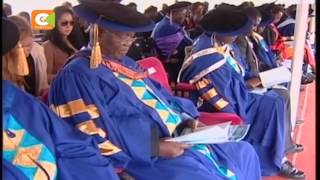