Residents in Turkana County have been urged to move to safer grounds due to potential Turkwel Dam spill over.

The Water Resources Authority said at least 300,000 locals in Lodwar, Katilu, Loyapat, Nakwomoru and settlements along the shores of Lake Turkana are likely to be displaced.

The expected impact in case of spillage could also see the damage of water abstraction points on the river, including Turkwel Irrigation Scheme, bridges and roads.

Since the onset of the rains in October 2019, most of the catchment areas have been receiving above normal rainfall.

According to WRA, the ongoing rainfall in the Mt. Elgon catchment have made its water levels go beyond the highest water levels ever reached.

Turkwel Dam was built between 1986 and 1991 and serves several purposes including hydro-electric power generation, irrigation, tourism and fisheries.

It is fed by Turkwel River which flows from Mt. Elgon water tower (Suam) in the border of Kenya and Uganda.

The dam is managed by the Kerio Valley Development Authority.

In May this year, floods and landslides killed nearly 200 people and displaced 100,000 with unprecedentedly high water levels at Masinga and Turkwel dams.

This following heavy rains which accelerated in mid-April.

At the time, Energy CS Charles Keter said the water levels at the two major dams were unprecedentedly high.

Masinga and Turkwel have a combined installed electricity generation capacity of 140 MW, representing about 6% of Kenya’s total installed capacity.

Kenyans were also warned that the heavy rains and landslides would also lead to water shortages.

“The infrastructure to deliver water has been washed away … pipelines have been clogged,” said Water CS Kariuki.

She urged residents of several cities including Nairobi to use their water in a “rational” manner. 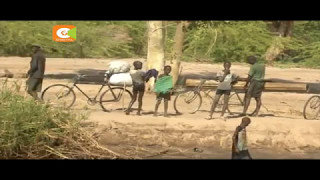