Pope Francis plans to visit Myanmar and Bangladesh in late November and early December, two countries caught up in a crisis over the Rohingya Muslim minority.

The Vatican, confirming an earlier Reuters report, said on Monday he would visit Myanmar from Nov. 27 to 30, stopping in Yangon and in the capital, Naypyitaw. He would visit the Bangladeshi capital, Dhaka, from Nov. 30 to Dec. 2.

The announcement came hours after Bangladesh border guards pushed back thousands of Rohingya Muslims fleeing the worst violence in Myanmar in five years, with 104 people killed. 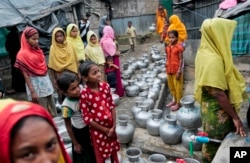 In February, Francis issued a stinging criticism of the treatment of Myanmar’s Rohingya community, saying they had been tortured and killed simply because they wanted to keep their culture and Muslim faith.

Many Buddhists across Myanmar regard them as illegal immigrants from neighboring Bangladesh.

About 40 migrants feared dead after boat capsizes off Western Sahara

At least 43 migrants drown in shipwreck off Tunisia