By Chrispine Otieno For Citizen Digital

Residents from Nyanturago in Kisii County on Thursday staged a demonstration against decision to move Mzee Simeon Nyachae’s funeral venue.

According to them, moving the venue from Musa Nyandusi stadium to Gusii stadium amounts to disrespect of their culture since Nyachae’s will indicated where the official ceremony should be held.

The angry residents who thronged the stadium were astonished to see organizers demolish tents already erected for the Monday, February 15 send off.

According to them, local hotels and shops were already stocked in readiness to receive visitors across the country.

Musa Nyandusi Stadium is considered a cultural venue for most Gusii cultural and political activities.

However, the venue for the burial service was changed after the family said COVID-19 containment protocols would not be achieved at the initial place due to limited space.

The service will be held at Gusii Stadium on February 15 starting at 9 am before the procession leaves for his home, his son Charles Nyachae said.

The late Cabinet Minister will then be laid to rest at a private ceremony at his home in Nyosia Village, Nyaribari Chache.

On Thursday, a memorial service was held at the Nairobi Central SDA Church-Maxwell for family and friends.

May God grant his family comfort and peace during this difficult time.

May He Rest In Eternal Peace. pic.twitter.com/CG2UHyckEA

Nyachae died on February 1 at the age of 88 and is survived by four wives and 20 children.

He once served as a chief secretary and head of civil service during the late President Daniel arap Moi era.

According to the Business Daily, he was among the leading shareholders of the NCBA Group alongside the Kenyatta family, Naushad Merali and the late Central Bank governor Philip Ndegwa. 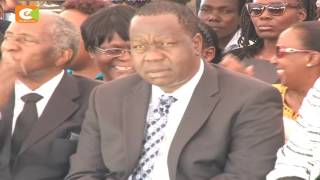 Story By Chrispine Otieno More by this author