A rare polka dotted Zebra named Tira that had been spotted in the Maasai Mara Game Reserve has left Kenya for Tanzania.

According to The Citizen, a Tanzanian newspaper, the newborn zebra foal that had been first sighted in September was seen crossing into the Serengeti National Park.

“The baby Zebra, almost a month old, is grazing with the herds in northern Serengeti, ” The Citizen quoted Felix Migoya, an official from the Kenya Tour Guides and Drivers Association.

The rare animal, now known as ‘Tira’, is said to have left Kenya with the parents during the annual wildebeest migration.

It was named after Antony Tira, a Maasai tour guide and photographer who first spotted the animal and posted its pictures on the Matira Bush Camp Facebook page.

A Forbes report said the pictures threw tourists into a frenzy as tour guides’ phones rang off the hook; animal enthusiasts wanted to catch a glimpse of the rare spectacle.

Experts say the foal had allegedly been mistaken as pseudo-melanistic; a condition where animals display some abnormality in their stripe pattern.

The National Geographic had compared Tira to a rare black foal spotted in the Okavango Delta in Botswana.

However, Forbes noted that ‘zebra foals are chocolate brown with white stripes when they are born and the brown darkens to black as the animal matures’.

Prof. Greg Barsh from the HudsonAlpha Institute for Biotechnology added: “This animal (Tira) is different from most others that have been described as pseudo-melanistic…it is probably better described as spotted or partially spotted.”

The Professor Emeritus at Stanford University cited another case of a blonde Zebra in Tanzania saying mutations can interfere with melanin components.

He averred that the blonde color could be a result of ‘normal numbers of melanocytes producing abnormal melanin pigments.

“Tira’s melanocytes either lost their internal biological GPS or they have amnesia,” the Forbes report reads.

Rhino deaths under investigation, may not be linked to poaching – KWS 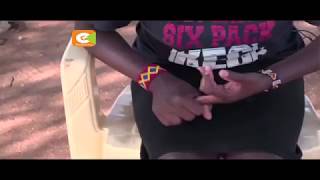