Senator Sakaja fined Ksh.15,000 following his arrest at a city bar during curfew

Sakaja appeared before the Kasarani open court on Tuesday, a day after he recorded a statement at the Kilimani police station.

He was charged with breaching curfew orders contrary to orders 3 of the public order, 2020 as read with section 8(6) of Public Order Act 56 of the laws of Kenya.

The senator was arrested on the wee hours of Saturday morning at a bar in Kilimani alongside 10 other revelers.

Speaking to the media on Monday shortly after he recorded a statement at the Kilimani police station for flouting COVID-19 rules, Sakaja apologised and promised to take full responsibility.

“I was outside my house past 9pm which is after curfew hours, it is regrettable but all of us make mistakes,” Sakaja said.

“I will be abiding by the law, no one is above the law, I have paid the cash bail and will appear before the court tomorrow and the entire course of law will be followed,”
During the statement, the senator however scoffed at law enforcement agencies that had trooped to his residence seeking to arrest him after the incident.

“I’m not a fugitive, why send 50 armed police officers to stake out waiting to arrest me and keep me in the cells for the weekend?” He quipped.

He said the police officers sent to arrest him had left his family – especially his three young children- very traumatized.

He also denied claims that he threatened police officers with transfers following the night-club arrest.

“I did not threaten anyone, I have no powers to transfer anyone, it is just that a lot of things happened, they even punched me, If it was just about being outside after 9, that is okay, but the rest… lets just wait,” he said.

A police report seen by Citizen Digital stated that the Senator was advised to leave but refused and instead “became violent raising his hands up to be handcuffed.”

“He incited others not to get away hence was arrested together with three others who refused to give their names for disobeying curfew orders,” read the report. 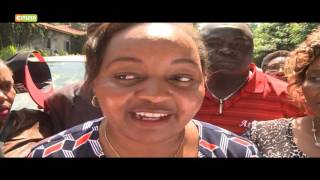