By Enock Muswii For Citizen Digital

Grace Kanamu Namulo, the suspect in the murder of Vioja Mahakamani actor Jamal Gadafi was on Thursday denied bail and at the same time ordered to undergo a mental assessment.

Kanamu is accused of stabbing to death actor Jamal Nassul Gadafi known for his roles in Vioja Mahakamani and Junior, using a kitchen knife.

She appeared before Machakos High Court Deputy Registrar Nelly Kenei where the prosecution argued that the application to grant bond was unmerited.

“This is a High Court matter and powers of Deputy Registrar are limited, the responded is at liberty to make any necessary application before the duty judge,” alluded State Counsel Ms. Mogoi.

Kanamu, though her lawyer had applied to be release on bond on grounds that she is a mother of school going children.

The prosecution also opposed the release arguing that formal procedure demands the accused to take plea before the bond issue.

The Deputy Registrar ordered the suspect taken to Mathari Mental Hospital for mental assessment and be detained at the Machakos GK prison.

The couple, who had attended an evening party at the Arks Hotel in Mlolongo, Machakos County, a few hours to 6pm on Tuesday are alleged to have quarreled after the woman allegedly began dancing suggestively and accepting drink offers from other men.

Mr. Gadafi and Ms. Namulo are then reported to have left the party and went to a butcher shop which is located a few meters from the restaurant, where they were having a meal and drinks.

The pair continued to argue, a wrangle which was followed by the fatal stabbing of Mr. Gadafi. 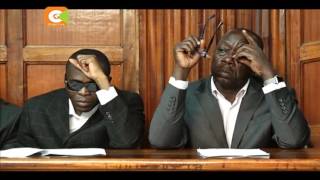 Story By Enock Muswii More by this author