The Education Ministry has warned that teachers found using unapproved books such as Blood Ties risk 3 years in jail.

In a statement released on Thursday, the Ministry noted that some schools are procuring unapproved books that contain unsuitable content.

“You are therefor required to bring to the immediate attention of all Principals and Headteachers that only books listed in the Orange Book are allowed for use in schools,” the statement from Elyas Abdi, Director General for Basic Education, reads.

In the letter addressed to all regional and county Education directors, Mr. Abdi warned that principals or headteachers who fail to implement the policy will have contravened Section 27 of the KICD Act, 2013.

The Act states that a person who purports to develop any curriculum in respect of any institution or applies in Kenya any local or foreign curriculum or curriculum support materials without approval of the council commits an offense.

The Orange book cited in the Education Ministry statement is in two volumes and lists approved textbooks and other instructional materials for pre-primary, primary and secondary schools as well as teacher training colleges.

The latest edition is the 16th one that was revised on January 2017; it is available in this section of the Kenya Institute of Curriculum Development (KICD) website.

Blood Ties has drawn sharp comments from Kenyans who faulted its publishers for approving a book whose content includes obscene language and violent characters.

The publisher, Stoymoja, on Thursday released a statement saying they have reviewed the book again and have decided to recall it.

“Taking into account the concerns raised, we are currently in process of recalling all copies of the book from schools and bookstores nationwide. Primary schools, teachers and parents who have purchased this book are advised to get in touch with Storymoja,” the statement reads.

Critics however claim that the process of approving books for use in Kenyan schools may have been compromised.

“Some parents claim your team was at their primary school last term’s closing day marketing Blood Ties. Also are you telling us all the primary schools asking parents to buy this book were not convinced to, by you?” one Wanjeri Nderu posed on Twitter.

“How is this curriculum vetted and the text books are children are reading in school.. Blood Ties is the title of this book that students were asked to buy,” Evangeline Karimi. 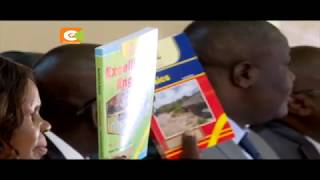