Video of donkeys at slaughterhouse was shot in Tanzania – KSPCA

By Duncan Mutwiri For Citizen Digital

A video depicting donkeys being hit on the head allegedly at a slaughterhouse was not shot in Kenya, an animal welfare charity has said.

In a lengthy statement on Twitter, Kenya Society for the Protection & Care of Animals (KSPCA) said the video originated from Tanzania.

KSPCA further noted that in Kenya, livestock are slaughtered in a humane manner and inspectors regularly train slaughter house staff.

In the video, two men dressed in white are seen carrying captive bolt pistols and hammering the donkeys that are in an enclosed compound.

Some are in the back already dead in a pool of blood while the ones on their feet are sought by the abbatoir workers.

Kenyans who shared the video online castigated the men calling for their arrest.

“This is revolting. You do not treat animals that cannot defend themselves in such manner. Every faith advocates for quick and painless death for an animal. No wonder we are faced with so many challenges as a country,” Mohammed Hersi said.

Hersi had shared the video from one Mohamed Bulle who claimed that the video was shot in Naivasha, Kenya. 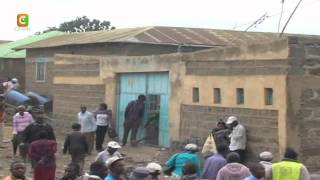 Story By Duncan Mutwiri More by this author