What the law says about children’s rights to education

The story of a boy who was denied admission to Starehe Boys Centre has triggered a debate on what the law says about the rights of children in Kenya.

Reports now indicate that a team of lawyers will be filing a case in court on the same on Monday next week.

According to the Children’s Act, a child is any human being under the age of 18 years and ‘in all actions concerning children, whether undertaken by public or private social welfare institutions, courts of law, administrative authorities or legislative bodies, the best interests of the child shall be a primary consideration.’

The law further states that no child shall be subjected to discrimination on the ground of origin, sex, religion, creed, custom, language, opinion, conscience, colour, birth, social, political, economic or other status, race, disability, tribe, residence or local connection.

On Friday, the parents of Jack Mutuma Mbabu went through what has been their routine for the last several days: shuttling between the Starehe Boys Centre and the Ministry of Education offices at Jogoo House.

According to them, their son was properly admitted to this school through the government’s National Education Management Information System (NEMIS).

However, the school as well as its old boys have rejected his claims saying the ministry jumped the gun in uploading Mbabu’s name on the system before he could fill the Yellow form; an internal requirement that dates back many years.

In a new twist, a report by ministry officials paints a totally different picture on the circumstances that led to the current stalemate.

The report done by the officers who visited the school on Thursday acknowledged that Mbabu was genuinely admitted to the school through NEMIS.

It further notes that the alleged misbehaviour by the parent within the school compound should not cost him his admission into Form One.

The report further states that the boy met all the requirements except what it called a delay in filling the Yellow form.

Further, in the 2019 national schools Form One intake list, Jack Mutuma’s name appears at number 66 of those selected to join Starehe Boys Centre.

The school however says it no longer has a place for the boy and earlier in the day refunded his parents all Ksh.70,000 that they had deposited in the insitituion’s account as school fees.

Telltale signs of a tussle between Starehe Boys Centre and the Ministry of Education have been simmering for months now.

Many old boys accuse the government of seeking to take over control of the school that has produced some of Kenya’s top leaders and business professionals including the current chair of the Kenya National Examination Council (KNEC) George Magoha.

Magoha is the man at the centre of cleaning up the country’s examination system.

For now, the ministry has asked the parents and their son to report to the office of Education CS Amina Mohammed’s office on Monday for further direction.

Previous Post
DPP gazettes Murgor, Taib and Kihara as special prosecutors
Next Post
Private security guards in Kenya to be armed with guns 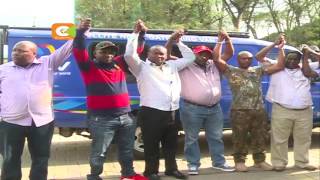