Where he went, whom he met: Retracing Nkaissery last moments

By Brian Okoth For Citizen Digital

The late Interior Cabinet Secretary (CS), Major Gen. (Rtd.) Joseph Nkaissery, arrived at his Karen home in Nairobi at around 9pm Friday after hanging out briefly at a social joint at the Bomas of Kenya in the evening, Citizen Digital has learnt.

Nkaissery had during the day, (on Friday), attended a public function at Uhuru Park, Nairobi – the National Prayer Service – which would be his last. The event was also attended by President Uhuru Kenyatta and his deputy William Ruto.

Hours before the Uhuru Park meeting, the late Nkaissery is said to have had lunch at the nearby Serena Hotel.

Sources further told Citizen Digital that Nkaissery, after the prayer meeting, proceeded to his Harambee House office, where he met Interior ministry officials.

Later on, he would go to State House for a meeting with President Kenyatta to discuss the state of security in the country ahead of the August 8 general poll.

“Indeed on one of his last notes he spent discussing his great passion, which was Kenya’s preparedness for the Junior Athletics (IAAF U18 Championships) that is supposed to commence in the next few days,” President Kenyatta said in his statement.

The Interior Cabinet Secretary is reported to have gone home and later had dinner with family as they watched the day’s news on a local television.

It is at home where he is said to have collapsed as he prepared to go to bed around 10:30pm. He was rushed to the Karen Hospital; reports indicating he died as doctors tried to resuscitate him around 1am Saturday.

His death shocked his family and the nation in the wee hours of Saturday. The minister’s wife, Hellen Nkaissery, suffered a high blood pressure on receiving the news. She remains admitted at the Nairobi Hospital.

When he was alive, Nkaissery spoke well about his wife, who was one of his key pillars in the campaigns in Kajiado Central Constituency.

A postmortem by government pathologist, Johansen Oduor, has been planned for Sunday, July 9, sources say.

A team of detectives spent the better part of Saturday at the minister’s Karen home and the Bomas of Kenya to try and piece up what could have led to his death.

President Uhuru Kenyatta led the nation in mourning Nkaissery, whom he described as a man who was ‘ruthlessly’ diligent at his work.

“We lost a gallant officer, an officer who has for the most part of his life served with total dedication and love for his country. Maj General Joseph Nkaissery was a man who believed in this country, believed in the principles and foundation on which this country was built. A man who dedicated most of his life to serving this great nation. I personally have lost a friend, a colleague,” said President Kenyatta.

In his condolence message, Opposition leader, Raila Odinga, said Nkaissery’s death was a huge loss for Kenya and the Maa people.

“He (Nkaissery) applied himself to all aspects of our security with an unparalleled commitment. Whenever duty called, he was there in an instant. He brought this commitment to the security docket after taking it over at a time the country was facing immense security challenges. He left a huge mark,” said the former Premier.

“On behalf of my family and the entire Judiciary, I wish to express our deepest condolences and heartfelt sympathy to his family and friends, and indeed the people of Kenya, for this great loss,” said the CJ in a statement to newsrooms Saturday.

Former Vice President and Wiper Party leader, Kalonzo Musyoka eulogised Nkaissery as a leader, who was “committed to public service and had great dedication to duty”.

“In the passing on of Gen. Nkaissery, Kenyans have lost a man of great courage and determination. The Maa community, in particular, has been dealt a severe blow from the loss of such an astute leader of Gen. Nkaissery’s calibre. May the Almighty God grant his family the fortitude to bear the pain of this great loss,” said Kalonzo.

Several other leaders including his Cabinet colleagues and Members of Parliament (MPs) sent their condolences to Nkaissery’s family and the nation. 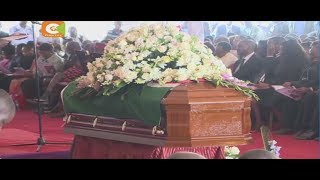 Story By Brian Okoth More by this author